A man may have repeated the choicest words, and yet not have prayed at all. A man may utter no word whatever, and he may be praying most effectually, as Moses and Hannah. Saul had never offered prayer of the kind which the Lord can accept. He knew the letter of the truth according to the ceremonial law; but he did not know the spirit of it as it is embodied in Jesus.

He had been going about to establish his own righteousness, but he had not submitted himself to the righteousness of Christ; and therefore in his prayer he had not been traversing the road which led to the heart of God. If you employ a servant to do a work, and he persists in doing another thing, however industriously he works, he will receive nothing at your hands. So if you pray in a way which God has never ordained, you will not receive anything of the Lord. Saul had never made mention of the name of Jesus. There is none other name under heaven given among men whereby we must be saved; there is none other name by which we can hopefully approach the mercy seat.

Saul had rejected that name, and had come in his own. Real prayer cannot come from men whose characters are contrary to the mind of God. Their lives have effectually pleaded against their lips. Saul had been a persecutor, and how can a persecutor pray? If you have the spirit of hate in you, it nullifies your devotions; for prayer ought to be the flower and crown of love.

Friend, if you are living an ungodly life, I do not care how regularly you bend your knee in seeming devotion, there is nothing in it. Saul with all his prayers had never truly prayed, because humility was absent from his devotions. His prayer was the expression of thankfulness that Saul of Tarsus was a Hebrew of the Hebrews, as touching the law blameless.

In the courts above, where outward appearances are nothing, and God looketh at the heart, his pious harangues were not reckoned to be prayers at all. It is implied that it was a remarkable thing for such a person now to pray.

It is a miracle of grace to bring a proud Pharisee to plead for mercy like a penitent publican. It is not half so wonderful that an irreligious man should begin to pray as that a vainglorious professor should begin to pray; because He has been a formalist for so long, and so rooted in the habit of formal devotion, and so contented with it. It is easier to attend a thousand masses, or to go to church every day in the week, than to offer one true prayer. Of self-righteousness.

It is a great thing to conquer sinful self, but it is a greater thing to overcome righteous self. The man who is downright bad and feels it, asks for mercy; but these people are bad at heart, and do not feel it: therefore they will not seek the Lord.

IX. The Acts of the Apostles. The Harvard Classics

Of prejudice. He has made up his mind that he will not see the light of God, because he believes in his own light. Even religious fervour may become a hindrance when that ardour is for a false faith. The earnest formalist is cased in steel, and the arrows of the gospel glance from him.


It is Divinely declared that he did pray. One would have liked to have heard him. See him now! This fine, good man! How humble he is! His prayers began with a full and grievous confession of sin. Now you will find him acknowledging his great need--a new heart and a right spirit. I think I can see mingled with that prayer the lowliest adoration. How he would worship Jesus of Nazareth as his God now that he was conquered by Him!

Consider what pleas he had. Pleading is the truest and strongest part of prayer. And all this must have been steeped in a wonderful fervour. It is evident that the Lord accepted my prayer. I know it from the text, because God bore witness that he did pray. He was about to answer the prayer. He had Ananias in readiness to go and comfort the poor blinded penitent. God is about to answer your prayer if you have cried to Him. Perhaps the man is present who will speak to you. And yet when he does pray, God makes a wonder of it.

It is his first prayer this morning. Good spirits watch you. I beseech Thee, deliver me! 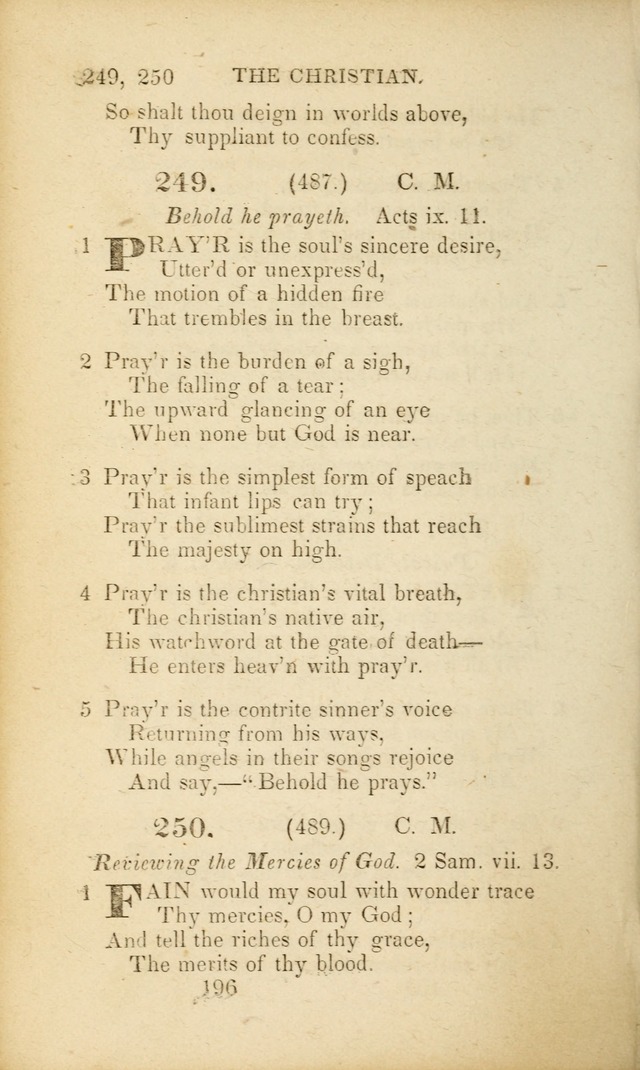 He whom Peter preached. He whom Stephen saw. He whom Saul heard. He whom Ananias served. A native of Tarsus. A persecutor of the Church.

A sinner arrested. A penitent converted. It was becoming. It was necessary. It was beneficial. It was exemplary.

What grace has done. What grace can do. What grace must do. What grace leads to. The circumstances which led Paul to pray. His understanding was convinced, his will was subdued, his heart was converted, and his soul was saved. What was there in them which rendered them acceptable? The prayers of a sinner thus humbled, we may feel assured, were offered up in humility.

And not only were his prayers offered up in humility, but we cannot doubt of their earnestness also. We may naturally conclude that Paul also prayed in faith, after the recent wonderful revelation made to him. The light in which God regarded the prayers of Paul, and in which He regards the prayers of all who offer them up in the same spirit that he did. God regarded them as a mark of his real conversion, and as such approved of and accepted them. Russell, M. We live in a world of changes.

Seedtime and harvest, summer and winter, etc. Human affairs are as variable as the seasons. But no changes are so important and interesting as those of a moral nature. It is painful to see a fellow creature proceeding from evil to evil; but how pleasing is it to see a sinner plucked as a brand from the burning!

To one of these remarkable changes we are referred in the text, from which we are led to remark That the Lord knows where we are and how we are engaged. What was this house of Judas? An inn?

If so, it was a sad situation for a man in spiritual distress; and never did an inn before or since accommodate such a passenger. Perhaps it was a private dwelling belonging to one of his acquaintances. If so, what would be the emotions of the family as he entered! But however this may be, the Lord knew--the street--the very house in which he was; and what he was doing there.

It would be easy to multiply similar instances, e. He knew how to guide Cornelius in sending to Joppa for Peter. Let hearers think of it; and remember that God is privy to all the workings of their minds while in His worship. Let the righteous believe this; and remember that though they are poor and needy, yet the Lord thinketh upon them. And, oh!